Collabro, the world’s most popular musical theatre vocal group who have risen to international fame since winning Britain’s Got Talent in 2014 announce a new single – Bridge Over Troubled Water. 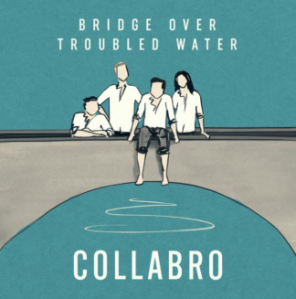 Collabro are pleased to announce their brand-new single, a cover of the Simon & Garfunkel classic Bridge Over Troubled Water. The single will be available to download on Friday 10th June 2022.

Collabro’s international fame has grown since winning Britain’s Got Talent in 2014. Collabro have gone from strength to strength, with two million record sales, six top-selling albums, five sell-out UK tours, and headline slots at the London Palladium and the Royal Albert Hall.

Bridge Over Troubled Water will feature on Collabro’s new seventh studio album Be Still My Soul that will be released 7th October 2022.

Collabro, voted the nation’s favourite BGT winners, has taken fresh inspiration for their latest album from a celebrated back catalogue of legendary songwriters and celebrated hymns.

Be Still My Soul is the perfect easy listening album for any listener, blending Collabro’s distinct vocals in original and timeless arrangements. Every song of the Be Still My Soul album is recognisable and was carefully chosen by the four band members Michael Auger, Jamie Lambert, Matthew Pagan and Thomas J. Redgrave.

Motivated by the ever-changing world, Collabro presents an album that offers each listener the opportunity to find a moment of reflection, as these ten evocative and beautiful tracks take you on a journey.

Jamie Lambert said “We wanted to create an album that would take people to a place of healing and peace after a very difficult few years. For everyone, life since 2020 has been turbulent, uncertain and stressful. This album is like a chance to climb out onto the riverbank for a bit, take some rest, and watch the world go by. We hope people will get as much from listening to it as we did from making it”

This site uses Akismet to reduce spam. Learn how your comment data is processed.

Latest from the Blog: Jem Girl at the Piano

When speaking about its creation Rxth says: ‘Starlight’ is one of those songs that, lyrically and melodically, arrived almost as a fully formed download. It was exactly what I needed to hear at the time, yet I didn’t feel like it was just for me. It’s a reminder that we’re all a ‘work in progress’ […]

Sophie Griffiths Rolls Back The Years and Remembers Her First Real Heartbreak On Wholesome New Cut Evergreen. Following on from the success of her recent single, Machine, Sophie Griffiths is back with a heartfelt love letter to friendships lost and new experiences gained on nostalgic cut, Evergreen. It’s been no secret for a while that […]

Over 120 performers – including The Shires and Seth Lakeman, 10 stages, 1 day, A big celebration! Now in its seventh year, International Busking Day will return on Saturday 16 July with big names sharing the stage alongside up and coming artists and grassroots acts. The festival, supported by the Mayor of London, is presented […]